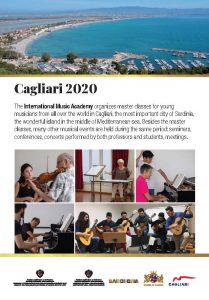 Cagliari protects the history and the memory of the ancient cultures that succeeded in the city. During the centuries the numerous and different people that inhabited Cagliari, infused a homely character toward the visitors.The testimony of the different cultures is evident through its streets. A few steps suffice, among ancient and new buildings, to all of a sudden enjoy the enchantment of fascinating monuments that tell the history of the city.

Watching Cagliari from the sea, one has a feeling of entering a scenic city, easy to see due to the immediacy of its landscape, in constant variation from the points of view. The African look given by the palms trees and the yellow limestone are tempered by the architecture markedly western and this combination of character so distant makes the city unique in its diversity.

Today Cagliari appears like a complex city, with a heritage of great importance as well as a modern personality, coherently to a capital that developed, with time going by, in harmony with the surrounding area, being a pivotal part of it.

VISIT THE TOURIST PORTAL OF THE CITY OF CAGLIARI