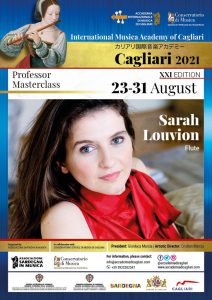 Born in the North of France, Sarah Louvion studied the flute with Raymond Guiot, Philippe Pierlot and Vincent Lucas. After being awarded with flute and chamber music in the Conservatoire National Supérieur de Paris (class of Alain Marion and Sophie Cherrier), she concluded her studies with the „ Cycle of Perfectionnement“.
Thanks to these remarkable accomplishments, Sarah Louvion got the support of the Yamaha Foundation of Europe, the Meyer Foundation, the Société Générale and the Natixis Banque Populaire Foundation.
Alongside her musical education, she pursued studies in mathematics and physics at university which highlights another facet of her extraordinary career path.
Sarah Louvion has won numerous prizes at international competitions. For example, in 2001, she was awarded first prize at the International Competition for flute in Kobe, Japan, and third prize at the International Competition in Geneva, while in 1999, she won second prize at the International “Syrinx” Competition in Rome. More recently, she was awarded the international prize Pro Musicis (in the solo category) in Paris in December 2011.
Sarah is gaining a fine reputation as a soloist performing in a range of national and international festivals including the MIDEM in Cannes, the festival of Radio-France and festivals in Prades, Weilburg (Germany) among many others. At the International Festival of Colmar she premièred the sonata for flute and piano by Guillaume Connesson, which was dedicated to her by the composer.
Sarah appears regularly as a chamber musician. She has also been honoured with invitations to various countries whose cultures continue to be a source of inspiration to her. These include Japan, Taiwan, Thailand, Korea, Malaysia, Indonesia, the Philippines, Pakistan, China, Hong-Kong, and Israel.
In 2002, Sarah Louvion was appointed principal flautist at the Frankfurt Opera House and Museum Orchestra. She is also regularly invited to play with others prestigious european orchestras.
Her passion for teaching leads her regularly to give master classes in Europe and Asia. She collaborates also with Muramatsu, her firm instrument for many years.
She recorded her first CD with the german label Farao Klassik. Celebrated by the critics (the CD received 5* by Diapason, selection of the radio France musiques…), it is dedicated to French music and includes the Concerto for flute by Jolivet, the Quintets by Roussel and Jolivet, and the first recording of the concerto by Bauzin, which is dedicated to Jean-Pierre Rampal.
Sarah Louvion appears regularly as a soloist with the Frankfurt Museums Orchestra, The National Orchestra of Lille, The Gulbenkian Orchestra, the National Chamber Orchestra of Toulouse, the National Orchestra of Île de France, the Orchestra Pasdeloup, the Chamber Orchestra Amadeus, the Orchestra of Douai, the Tokyo Ensemble, and the Chamber Orchestra of Moscou.
She made her debuts as soloist with furthers orchestras including Mozart Concerto with the Harpist Xavier de Maistre at the International Chopin Festival ( August 2014, Warsaw), with the Tokyo City Philharmonic ( Muza Kawasaki Summer Festival, July 2014), Mozart concerto with the Tokyo Metropolitan Symphony( Tokyo Suntory Hall, May 2015), solo concerts tour with the Chamber Orchestra of Lausanne ( Lausanne, Victoria Hall of Geneve, and Radio France Paris, February 2015), a solo concert with Kärtner Sinfonieorchester ( Klagenfurt, Austria, March 2015).
She is also preparing a CD for flute and piano, which will be dedicated to French-German Romantic music. This production will unite her country of birth, France, with her adopted country, Germany.
Sarah Louvion has been subsitute professor for one semester at the Musik Hochschule in Mainz (2014-2015), and is invited in season 2016-2017 from the japanese Geidai University ( Tokyo) as a short term guest professor, as well as at the Shanghai Conservatory of Music.