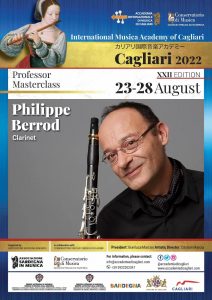 He trained at the Conservatoire National Supérieur de Musique de Paris (unanimously awarded) before becoming soloist with the Orchestre de Bretagne, then with the Orchestre Philharmonique de Radio France.
Invited as guest soloist, he also performs chamber music alongside many other prestigious artists. He collaborates with composers and several ensembles, such as the Sirba Octet, with whom he develops his interest in the more eclectic realms of live music.
He is also invited as soloist by the Mahler Chamber Orchestra, the European Chamber Orchestra and the Bayerischer Rundfunk in Munich.
Philippe Berrod is the recipient of many international competition prizes, and recorded albums with various label such as Indésens records, Sony classical and Cristal records, unanimously awarded (“choc Classica”, 4 stars Télérama, Diapason,”Clé de l’année” Resmusica, nominated at the french classical music award 2011).
He has been appointed Principal Professor of Clarinet and succeed to Michel Arrignon at the Conservatoire National Supérieur de Musique de Paris.
Philippe Berrod is artistic advisor for Henri SELMER Paris, designer and manufacturer of wind instruments since 1885. He performs on Privilege clarinets.