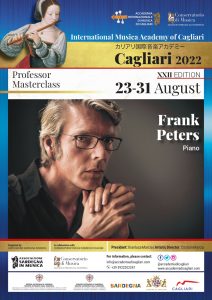 In 1985, he won the Dutch National Berlage Competition and subsequently performed in all major Dutch concert halls. He has given many radio recitals, concertized in all countries of Europe, Russia, the U.S.A., China and Australia. As a soloist he has given concerts with the Radio Philharmonic Orchestra, Radio Symphonic Orchestra, the Residential Orchestra The Hague and the Arnhem Symphony Orchestra, performing piano concertos of Bach, Beethoven, Ravel, Shostakovich, Rachmaninov, Prokofiev, Schnittke and Hanna Kulenty. In 2003 he gave the European première of Sorabji’s extremely complicated piano quintet with the Belgium Quatuor Danel and in 2006 the world première of Hanna Kulenty’s Third piano concerto, which she dedicated to him. Frank Peters has also appeared on Dutch television with a performance of Rachmaninovs First piano concerto. He made various CD recordings with contemporary music and compositions of Dutch and British composers. Additionally, he is a member of the Hexagon Ensemble and Ensemble MP21.
Frank Peters was prizewinner of the International Eduard Flipse Competition in Rotterdam, where he was also awarded the special prize of the Dutch press. In 1992 he was prizewinner of the International Prokofiev Competition in Saint Petersburg and in 1996 he was nominated for the Culture Prize of the Dutch National Broadcasting Cooperation.
Frank Peters is teacher of piano as a psrincipal subject at the Conservatorium van Amsterdam and the ArtEZ conservatory in Arnhem and Zwolle. He frequently gives masterclasses in France, Belgium and China.