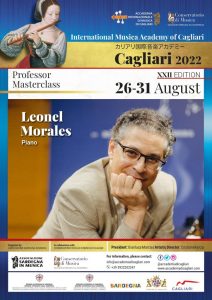 Born in Cuba, is a Spanish citizen and lives in Spain since 1991. He graduated from the University of Havana under the tutelage of Frank Fernandez, a student of Victor Merzhanov, which itself was a disciple of Feinberg, so he follows the traditional Russian school. He made a postgraduate with Dmitry Voskresensky and Jacov Latainer.

He is invited to be part of jury at major international piano competitions like Shenzen Piano and Orchestra International Piano Competition, Cleveland Competition, Pozzoli, Scriabin (Grosseto), Lyon, Valsecia, Cesar Franck, Pancho Vladigerov, Ferrol…
Morales give Master Classes all over the world in places such as the Mozarteum in Salzburg, Korea, Italy, Mexico, France, Belgium, China…

Many of his students have been prize winners in more than 40 International Piano Competitions.

In his two several tours in USA with National Symphony Orchestra of Spain and Mexico State Symphony Orchestra with Columbia Artists, has had the opportunity to play in the most important halls of North America, among them are Carnegie Hall, Kennedy Center, Lincoln Center, having great success with the critics and the public.

…Undoubtedly Morales is a pianist of great virtuosism, trust, efficiency but of big naturality and without big gestures (CLASSICAL MUSIC REVIEW)