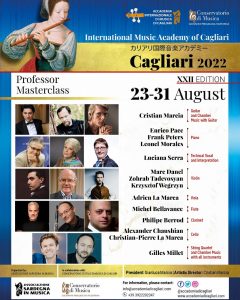 The International Music Academy, founded in 2001 by Cristian and Gianluca Marcia, organizes master classes for young musicians from all over the World and from all International School (Conservatoire National Superieure de Musique in Paris, Ecole Normale of music A. Cortot in Paris, Royal College in London, Geddai School in Tokio, Yonsei University in Seul, Conservatory of Mouscou , Der Kunste in Berlin ).
Besides the master classes, many other musical events are held during the same period : Seminars, Conferences,Concerts performed by both instructors and students, meetings and the Festival of Music “Le Notti Musicali di Cagliari “.
The Festival of the Academy is very important because the teachers and especially the best students can perform in a very prestigious context.
Courses take place in the State Conservatory (80 rooms and piano and 1200 places Concert Hall). In the Academy participates 300 students from all over the World.